THIS BEAUTY IS A BEAST 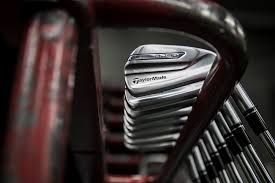 With the looks of a blade and playability of a cavity back the P790s are a potent mix. A forged face delivers great feel, while speed foam in the internal cavity (mid and long irons) supports the face and optimizes sound. P790 irons pack powerful performance into a clean, classic design to deliver unprecedented distance in a players iron. Through a combination of forged construction and our revolutionary new SpeedFoam Technology, golfers will experience feel, forgiveness, and workability unlike any iron of this caliber.

P790 irons pack powerful performance into a clean, classic design to deliver unprecedented distance in a players iron. Through a combination of forged construction and our revolutionary new SpeedFoam Technology, golfers will experience feel, forgiveness, and workability unlike any iron of this caliber.

With P790, TaylorMade’s engineers have answered the challenge of creating a forged iron that delivers remarkable distance as well as enhanced playability and feel—all in a refined shape preferred by discerning players. The P790’s hollow cavity uses SpeedFoam Technology, a new proprietary construction, which serves a dual purpose of generating ball speed as well as optimizing sound and feel. Injected into the clubhead, SpeedFoam provides the face support and sound-damping properties that make the performance of the P790 unlike any other iron in the TaylorMade family. The incorporation of the new wrapped face construction creates a cut-thru Speed Pocket on the sole with extreme flexibility in the lower part of the clubface; it’s this flexibility that creates greater forgiveness and consistency than is typically seen in a distance iron design.

With P790, we created a forged iron that meets the demands of discerning players and delivers distance performance never before seen in a players iron. By combining our new SpeedFoam Technology and forged face with a clean, classic design, we have effectively engineered an iron that is as beautiful as it is powerful – setting the new standard for all-around iron performance.

Designed specifically for the best Tour players in the world, P730 represents the most finely crafted irons TaylorMade has to offer. Taking direct feedback from our top athletes, the Tour-inspired shaping features improvements over previous TPMBs, including a smaller blade profile, refined leading edge, and crisp lines. Starting with P730’s forged 1025 carbon steel head, the face and grooves have been precision-milled to produce soft feel, clean turf interaction, and exceptional shot-shaping ability.

The P730 was designed to build off of our heritage of major championship winning blade irons, especially with TPMB ’11 and TPMB ’14. The overall goal was to retain the features that were iconic to the TPMB while at the time improving its performance in two subtle ways: shaping and mass properties.

Our website uses cookies to make your browsing experience better. By using our site you agree to our use of cookies. Learn More I Agree
× What Are Cookies As is common practice with almost all professional websites this site uses cookies, which are tiny files that are downloaded to your computer, to improve your experience. This page describes what information they gather, how we use it and why we sometimes need to store these cookies. We will also share how you can prevent these cookies from being stored however this may downgrade or 'break' certain elements of the sites functionality. For more general information on cookies see the Wikipedia article on HTTP Cookies. How We Use Cookies We use cookies for a variety of reasons detailed below. Unfortunately in most cases there are no industry standard options for disabling cookies without completely disabling the functionality and features they add to this site. It is recommended that you leave on all cookies if you are not sure whether you need them or not in case they are used to provide a service that you use. Disabling Cookies You can prevent the setting of cookies by adjusting the settings on your browser (see your browser Help for how to do this). Be aware that disabling cookies will affect the functionality of this and many other websites that you visit. Disabling cookies will usually result in also disabling certain functionality and features of the this site. Therefore it is recommended that you do not disable cookies. The Cookies We Set
Account related cookies If you create an account with us then we will use cookies for the management of the signup process and general administration. These cookies will usually be deleted when you log out however in some cases they may remain afterwards to remember your site preferences when logged out. Login related cookies We use cookies when you are logged in so that we can remember this fact. This prevents you from having to log in every single time you visit a new page. These cookies are typically removed or cleared when you log out to ensure that you can only access restricted features and areas when logged in. Form related cookies When you submit data to through a form such as those found on contact pages or comment forms cookies may be set to remember your user details for future correspondence. Site preference cookies In order to provide you with a great experience on this site we provide the functionality to set your preferences for how this site runs when you use it. In order to remember your preferences we need to set cookies so that this information can be called whenever you interact with a page is affected by your preferences.
Third Party Cookies In some special cases we also use cookies provided by trusted third parties. The following section details which third party cookies you might encounter through this site.
This site uses Google Analytics which is one of the most widespread and trusted analytics solution on the web for helping us to understand how you use the site and ways that we can improve your experience. These cookies may track things such as how long you spend on the site and the pages that you visit so we can continue to produce engaging content. For more information on Google Analytics cookies, see the official Google Analytics page. We also use social media buttons and/or plugins on this site that allow you to connect with social network in various ways. For these to work, the social networks may set cookies through our site which may be used to enhance your profile on their site, or contribute to other purposes outlined in their respective privacy policies.